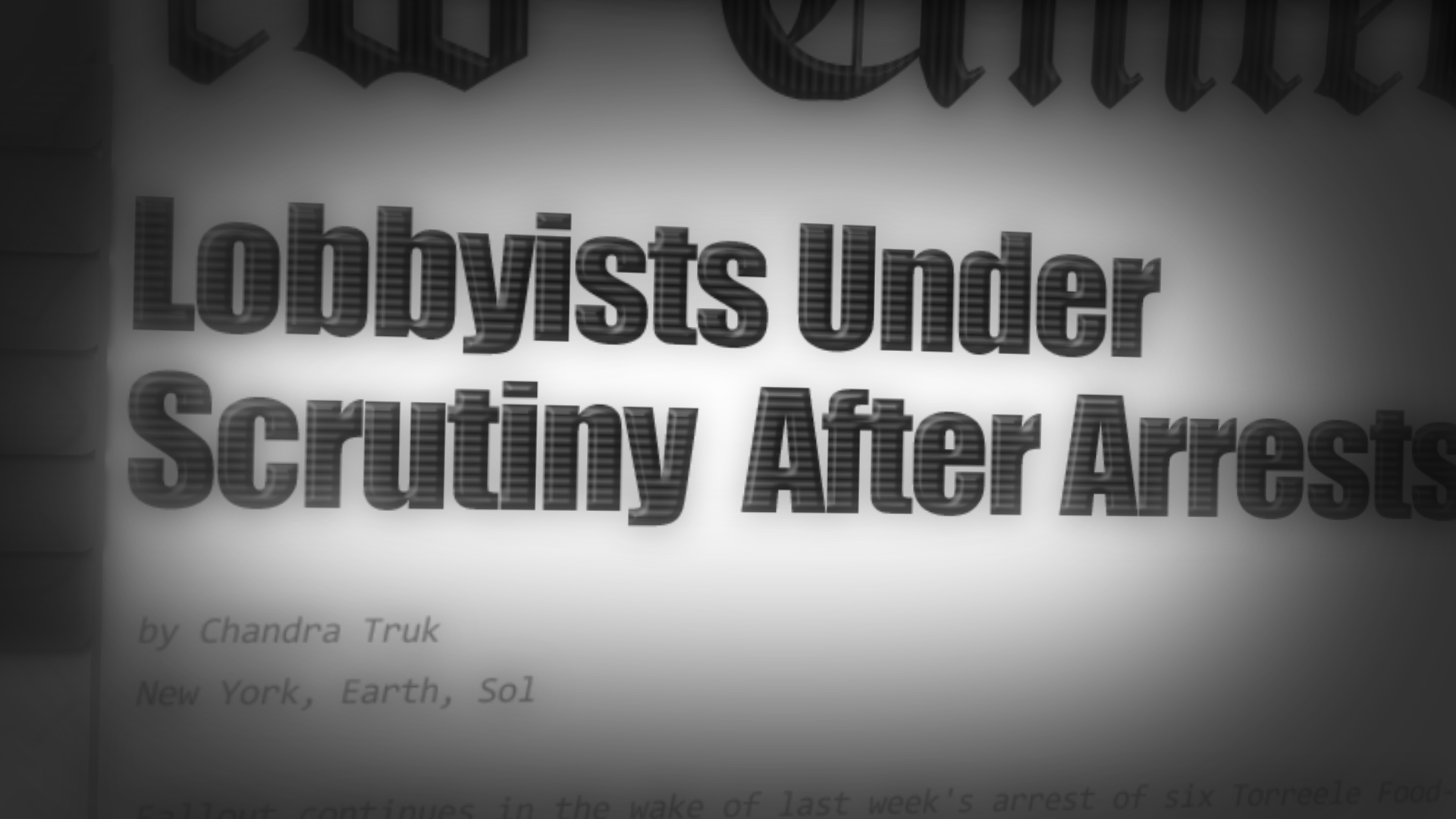 
Fallout continues in the wake of last week’s arrest of six Torreele Foodstuffs-associated lobbyists now charged with violating the Empire’s laws governing how lobbyists interact with the Senate. The extensive list of infractions and corruption charges outlined a concerted effort to illegally influence new food safety legislation currently being discussed in committee. Although the Advocacy has not commented on the investigation, additional accusations of undue influence have swirled across the political spectrum prompting renewed calls for a reworking of the Empire’s complex lobbying system. Many believe that the current system of rules has become ineffective and some powerful voices are beginning to call for the total elimination of the institution.

The Senate’s current regulations for lobbyists began following the fall of the Messer administration, which took an unmoderated, anything-goes approach to political influence. The initial set of rules, which included a basic lobbyist registration system and a loyalty oath, was supplanted in 2922 in response to a bribery scandal not dissimilar to the one making news today. In addition to further limits on face-to-face interaction between lawmakers and lobbyists, the updated regulations required stronger general disclosure for all registered lobbyists, established a database of authorized Senatorial lobbyists that tracks all meetings and government interactions, significantly reduced the amount of direct interaction anyone but a constituent can have with a Senator, and outright banned most forms of gifts. The law was reviled by the industry at the time as overreaching, with significant protests from major industry figures. Now, critics claim that lobbyists have adapted to these laws by finding loopholes and developing new, less-regulated ways to impact lawmaking.

Alysha Kane, chairperson of lobbyist monitoring group Undo Influence, says that the system must be completely overhauled once again. “Look at aerospace companies. They’ve figured out that, with the proper ad messaging, they can access the public consciousness directly and avoid running afoul of regulations,” she says. “So instead of buying a Senator directly, they now try to shape that Senator’s whole constituency… and the results are the same: the rich get richer and the window for innovation gets ever smaller. Who’s to say Anvil makes the best fighter ships in the galaxy when they control the message and make sure no one in power would ever even associate a company like Drake or Argo with the job?”

Trip Gangler, a senior accounts manager covering Anvil Aerospace for the consulting firm First Strike, disagrees. “The fact is that the current system works. There’s less underground lobbying today than ever before. So while I understand the furor over the [Torreele Foodstuffs] arrests, additional regulation will just slow the process at a time when fast military production and equipment adoption in particular is essential to everyone in the Empire. I don’t think ‘lobbyist’ has necessarily become a dirty word yet, but I do think we’re in the midst of a particularly delicate time. There’s very little understanding of the important job [Senate lobbyists] do or the intense level of scrutiny we are already under. A few bad apples aside, our work is performed ethically and is essential to moving our political process forward.”

Gangler, an effusive Earth-born Citizen in his mid-50s, is a veteran naval officer who rose through the ranks to command a Hammerhead before a combat injury forced him into retirement. Gangler’s firm, First Strike, works directly with lawmakers, directs public affairs messaging, and undertakes more wide-ranging projects to help maintain its clients’ various interests. The firm employs roughly 3,500 people in key markets, with most work currently contracted to Anvil Aerospace. The core team is located in a small headquarters on New York’s East 73rd street (Earth, Sol system) not far from the Senate itself, making it a fitting location to support the Empire’s largest trading aerospace concern. His familiarity with military command and seemingly endless natural charisma made him an ideal pickup for First Strike when he joined in 2938. “The days of imported Terran steaks and free-flowing Radegast were before my time,” Gangler explains. “Since ’22, everything that costs more than fifty credits is meticulously logged, explained, and reviewed. I can tell you how many pens my office used a decade ago… and so can half a dozen regulatory bodies.”

“But pens don’t matter,” he continues. “The galaxy is an incredibly complex place and on any given day a Senator will interface with their staff about everything from sentient rights to the complex details of Spectrum broadcast licensing. And in between they’re doing some pretty important work, like choosing the weapons that will be used to defend our planets. The way I like to look at it, it’s our job to make sure they have the information needed to make these vital decisions.

“A lot of people outside the industry are surprised to learn that I don’t spend more than an hour or two a week actually talking to politicians,” Gangler explains. “The old stereotype of the glad-handing lobbyist slapping backs and handing out favors has no place in modern government. Most of those calling for reform don’t believe that what we provide is an essential service… but the truth is that lobbyists have expanded greatly beyond just petitioning Senators on behalf of our clients. We are a vital resource that has become integral to the law-making process. Most days of the week, you’re going to find my office working to track down answers to some of the Senate’s hardest questions. Believe me when I say that you are going to sleep better knowing the people making decisions about your defense have instant access to data about how the current year Hornet outclasses the Gladius or that the fleet supply chain is expected to extend to needing additional tankers, tenders, repair ships… I mean, with how hostile things have gotten out there, I for one want to make sure they make the right choice to protect our empire.”

Detractors like Kane charge that most of what lobbyists do is little more than targeted advertising. Lobbying groups are increasingly spending larger portions of their budgets on advertising and “dynamic media” intended to imprint their messages on decision makers and the voting populace. First Strike maintains a process group wholly devoted to helping license Anvil Aerospace’s brand and products to everyone from frozen food manufacturers to holo makers. Thanks to this streamlined process, Anvil’s Hornet alone has shown up in over a dozen ads this past year for brands not directly connected to the ship manufacturer. On Spectrum, approved productions that would benefit from real hardware are even able to obtain camera-ready Hornets, Gladiators, and other ships at below industry-standard rates. From school lunches with the adventures of a pioneering Carrack crew printed on the packages to Hurricane silhouettes adorning disposable playing cards, lobbying organizations like First Strike spend billions to ensure their charges are as widely recognized as possible.

Through First Strike, Anvil also invests heavily in influencing military media. The results there speak for themselves, with the Hornet and Gladiator spacecraft being far and away the most common designs seen everywhere, from recruiting posters to deep-space propaganda broadcasts. Here again, Gangler believes that keeping the Anvil brand in the forefront of association with military successes is key to making sure the corporation keeps its prime contractor status. “If you leave it to the accountants,” Gangler explains, “you’re going to have the worst-performing ship every single time. It’s worth it for every single person involved to invest in influencing the powers that be to do the right thing instead of the cheap thing.”

With increasing calls for transparency and an upcoming military spending addendum bill that is poised to authorize a major extension to Anvil’s F8 program, Gangler has his job cut out for him. In spite of his spirited defense of lobbying’s role in lawmaking, it’s clear that there are questions yet to be answered and deep concerns over the breadth of control a single, well-funded firm can have over issues important to so many across the Empire. With even well-respected corporations like Anvil Aerospace and Aegis Dynamics funneling billions into increasingly wide-ranging public relations efforts, the issue of oversight becomes ever more important. “If something as innocuous as a foodstuff concern like Torreele can exercise seemingly unchecked control over government safety regulations,” Kane asks, “ then could decisions impacting the defense of our planets be similarly lopsided? Are other companies losing out on military contracts because of their hardware or because their competitors spent more on lobbying?” These are questions that it seems increasingly likely that the Senate must address directly.