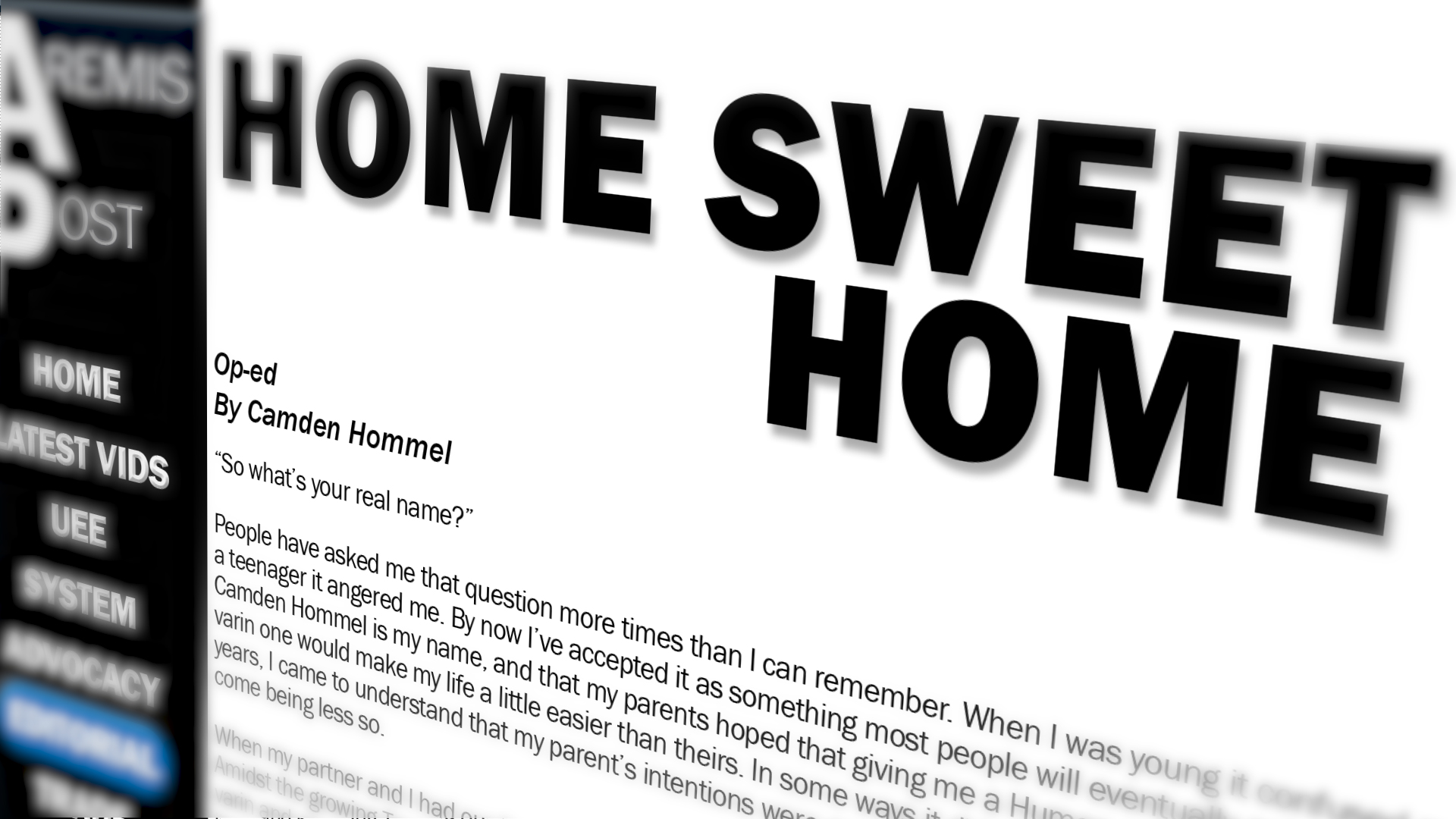 “So what’s your real name?”

People have asked me that question more times than I can remember. When I was young, it confused me. As a teenager, it angered me. By now, I’ve accepted it as something most people will eventually ask. I tell them Camden Hommel is my name, and that my parents hoped that giving me a Human name instead of a Tevarin one would make my life a little easier than theirs. In some ways it did and in others it didn’t. Over the years, I came to understand that my parents’ intentions were good and stopped blaming them for the outcome being less so.

When my partner and I had our first child, I promised not to put our daughter in the same situation. Amidst the growing Tevarin cultural resurgence, where my partner and I, maybe for the first time, could proudly call ourselves both Tevarin and members of the UEE, we decided to give her a name that honored her heritage. We believed we lived in an age where we could proudly embrace both cultures and wanted our daughter to grow up believing the same thing. Then on October 5, 2945, the Vanduul attacked Aremis and forever turned our lives upside down.

Thankfully my family survived, but our housing complex and much of the Tevarin neighborhood in New Corvo was destroyed. Supplies and relief aid flooded into the system but little found its way into our neighborhood. Seeing the way the UEE and its bureaucracy dealt with the Tevarin made me feel like we were the last ones on anyone’s mind. I grew angry and wrote several Op-Eds about our treatment and submitted them to this very paper but none were published. I felt forgotten and left behind. Even though I saw myself as a Tevarin member of the UEE, the system seemed to consider me a Tevarin first and a member of the UEE second.

This experience wasn’t mine alone. A close friend struggling with the same obstacles eventually gave up on rebuilding their life in Aremis and relocated outside the UEE to Branaugh, a system with a growing Tevarin diaspora. In recent years, it has become a haven for those wanting to immerse themselves in our culture and freely practice some of our long-abandoned traditions. Comms with my friend who moved there sounded intriguing, and after several long discussions with my partner, we decided to move there ourselves. If the UEE was going to see us as Tevarin first and foremost, then we decided that we should too.

Moving my family to Ne’er wasn’t without its complications but, once we settled in, it felt like home in a way New Corvo never did. With the streets full of Tevarin, I didn’t stand out in a crowd for the first time in my life. I ate foods I’d avoided ever since classmates made fun of me for enjoying such “strange” delicacies. I even helped a local neighborhood group build a small stone course in a vacant lot so our kids could learn to play khuley. And everytime I raised my eyes to the sky, Branaugh II’s majestic planetary rings took my breath away. Never before had I felt so comfortable and accepted. For the first time in my life, I was looked at for who I was instead of what I was.

Sure, local security and infrastructure were lacking when compared to most UEE systems, but I truly believed the benefits of being surrounded by other Tevarin choosing to celebrate and evolve a culture that had been dormant for centuries outweighed those issues. Plus, I thought conditions would only improve and community engagement would grow as more Tevarin moved to Ne’er. I was proud to be forging a new Tevarin cultural identity for future generations, but it wasn’t long before I began to question whether that could really happen.

The more time I spent in Ne’er, the more I worried about the long-term future for the settlement. Was it truly focused on living, honoring, and expanding upon our great culture traditions or was there something else going on? My concerns began when I started a neighborhood watch and hosted monthly events to discuss how we could improve safety. Not only were the events sparsely attended but some less-than-reputable residents visited my home to advise against implementing any new security measures. I had expected my neighbors to line up for a chance to protect each other just as our ancestors did, but it seems service for the greater good is one tradition yet to be fully embraced. When I met with local leaders about the issue they claimed there was nothing they could do and recommended that I put the safety of my family before that of the neighborhood. The message became quite clear. The system was set up to protect and benefit some Tevarin not but all of us. Sufficiently scared, I stopped hosting meetings and moved my family into another neighborhood.

My concerns only grew upon learning that my daughter’s school primarily focused on teaching her about the Human-inflicted horrors of the Tevarin Wars and the importance of our “ancient traditions,” which primarily consisted of a modern interpretation of the Rijora that felt very different than the original teachings I had learned growing up. Little educational consideration was given to topics outside these two areas, severely hamstringing my daughter’s chances of understanding the modern universe. If she ever chose to leave Branaugh, very little of what she learned would prepare her to succeed in the wider UEE.

That’s when I realized that I had repeated the errors of my parents on a much larger scale. My intentions when moving my daughter to Ne’er were good, but the outcome was potentially disastrous. My dream of her becoming a proud Tevarin ready to blaze a trail in the modern universe was not a reality. If anything, remaining in Branaugh would not only isolate her physically but ideologically from the rest of the universe. And in the worst case, potentially place her in an echo chamber of ideas that could lead to narrow thinking and exploitation by fundamentalists. Unlike the many long discussions I had with my partner about moving to Branaugh, we only needed to have one short one about leaving.

My family and I returned to New Corvo last year. While there were many aspects of Ne’er that I loved, the settlement seems to want to recreate an era that’s long gone and a culture that led us on a crash course with Humanity. My experience there has only made me more convinced that the best path forward for Tevarin lies within the UEE. I truly believe that the future of the Tevarin race doesn’t lie in our past but our future, and that it’s our responsibility to integrate the best parts of our great culture with that of the UEE. Because together we can both become stronger and create a better future for us all.