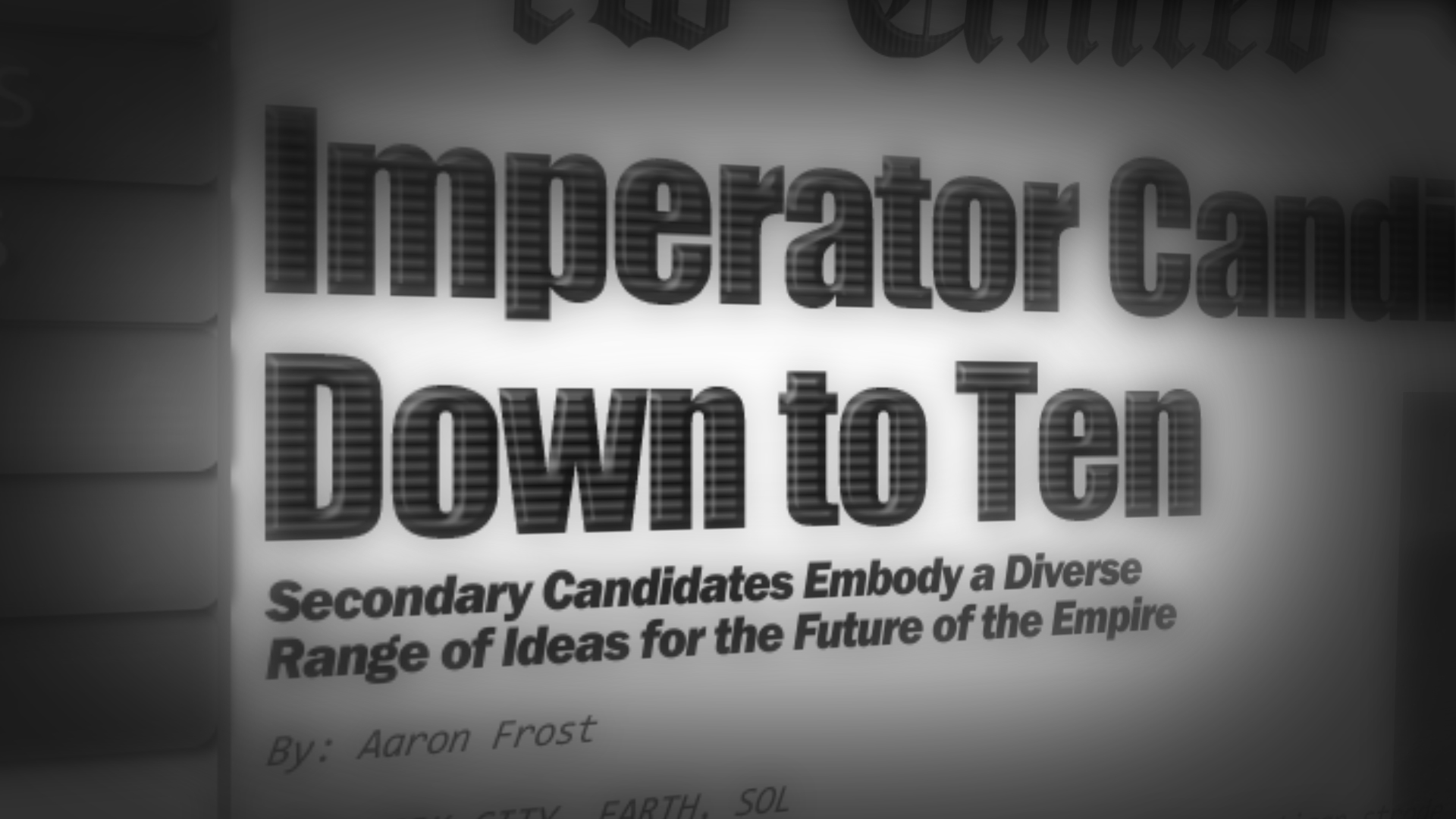 
A tense hush fell over the reception hall as Titus Costigan strode onto the stage and embraced his father and current Imperator, Kelos Costigan. They exchanged a few brief words far enough from the microphones to ensure that they remained private. The Imperator, acting in his official capacity as the master of ceremony, handed his son a pen to sign the documents that would make him a secondary candidate for the 2950 election. Once done, a smile spread across Titus’ face. He was now one of only ten candidates remaining in the race.

Amidst polite applause from the audience and other candidates, Titus stepped to the podium wearing a svelte Derion suit to deliver the final candidate speech of the evening. The charismatic political neophyte argued that his unique life experience made him the ideal choice to be the next Imperator. “True, I’m not a traditional politician, but that’s exactly what the Empire needs. I have both a long track record of success in the private sector along with in-depth knowledge of what is required to lead Humanity into our most prosperous decade ever.” The unspoken undercurrent being that his comprehensive understanding of the government’s day-to-day operations came from observing his father’s administration over the past decade. Following Titus’ speech, Imperator Costigan brought the ceremony to a quick close, politely refusing to take questions saying that the event should be focused on his potential successor. He briefly posed for a photo with all ten candidates and then left the stage.

The end of the signing ceremony kicked off a secondary voting period unlike any other in modern history. The open primary race had thousands of Citizens campaigning to be the next Imperator, leading to a surprisingly tight vote that saw the first runner up only 370 votes away from qualifying. The primary results also led to a first since the new election format was established in 2810 – a secondary candidate directly related to the current Imperator. Faced with this unprecedented situation, Imperator Costigan has refused to comment on his son’s campaign or that of any other candidate.

This situation has angered Universalist Party members, who had hoped that the popular Imperator would endorse the party’s preferred candidate and current High Secretary Illyana Sharrad. Insiders claim that some within the party are terrified of a nightmare scenario where Titus, who is also running as a Universalist, splits the secondary vote with Sharrad only to deny either a spot among the final five candidates. Sharrad refuses to publicly address the controversy and prefers to focus her campaign on the specific policy positions that distinguish her from other candidates. For her speech at the signing ceremony, Sharrad emphasized how she would lead the charge to improve the UEE by fast tracking several long-delayed infrastructure projects and championing initiatives to get more people involved with the Empire. Sharrad proclaimed, “Words will only get us so far. It takes real work, focus, and dedication to make tomorrow better than today. I have the fight and focus necessary to make these ideas a reality.”

While some see the growing rift between Titus Costigan and Illyana Sharrad as problematic, both candidates have benefitted from the increased media attention. The other candidates have not received equal interest or scrutiny from the empire-wide press, leaving them lagging in early polls. Thus the importance of the signing ceremony to not only unveil the primary winners but provide them with an opportunity to share their vision of the UEE to a massive audience, potentially for the first time, and attempt to stand out from the crowd of secondary candidates.

For the three Centralist candidates that made the secondary vote, the ceremony also provided an important chance for them to distinguish themselves from each other. Paul LeSalle claims the party’s strong showing in the primary “indicates the voters’ desire to return to a fiscally responsible approach to governance.” LeSalle is quick to take credit for his party’s success after spending eight years as the Centralist chairperson, a position he resigned prior to kicking off his Imperator campaign. Now LeSalle must move from familiarity as a political insider and distinguish himself from the other two better-known Centralist candidates, Deputy Assistant Director Emma Thorne and retired Navy Admiral Nikki Abdalla. LeSalle claims that he represents a purer vision of his party’s ideals by adhering more closely to the core platform of lower taxes and more restrictive social services. He also looked to stand out by being the only candidate to call for a reevaluation of the Fair Chance Act, which could potentially open previously protected areas of the empire for resource extraction.

The other two Centralist candidates discussed how they would better defend the empire, though their plans and even their main adversaries were drastically different. Emma Thorne, who currently serves as the Deputy Assistant Director of the Advocacy, described her plan to combat rising crime by expanding the size and role of the Advocacy. “I am tired of seeing the government trying to reinvent the Advocacy through its various initiatives and civilian actions, when the agents in the field are already in place. All they lack is the full support they need to do the job as well as they are able.” Retired Navy Admiral Nikki Abdalla criticized the current administration’s Vanduul War strategy and called it a “surefire failure.” She promised to extricate UEE troops from an “amorphous and unwinnable war” and redeploy them to quell crime within the Empire and strengthen the border against future Vanduul incursions.

Meanwhile, the Transitionalist Party again came together prior to the primary to select one candidate to receive the party’s official endorsement; a strategy meant to consolidate the party’s voting power and avoid the issue now facing Universalists and Centralists worried about multiple candidates splitting votes. This year, the party rallied behind controversial Terran Senator Mira Ngo, whose speech touched upon typical Transitionalist talking points that include moving the empire’s capital to Terra, outlawing terraforming, and expanding the Common Laws to provide more protection to Citizens and civilians alike. Senator Ngo’s speech centered around her campaign slogan New Ideas for a New Universe, and revealed a new initiative that would require each government department to have a certain number of Tevarin employees on staff. She implored the empire to “dream bigger and bolder. To not let those beholden to the past prevent our empire from evolving into something that’s more free and fair than what’s come before.”

Four candidates ran as independents, though their association with ascendant political movements across the empire helped them garner enough votes to make the secondary vote. The ceremony’s most bombastic speech came courtesy of Calvin Derry, a populist militia leader from Fora running on a self-proclaimed “Human First” platform. Derry delivered an incendiary anti-alien screed seemingly aimed at generating headlines rather than easing the concerns of those skeptical of his hardline stance. Derry promised to expand the rights of militias and empower the military to “use any and all means to eradicate the Vanduul menace.”

In opposition to Derry’s dire worldview, independent candidate Laylani Addison spoke of the incredible accomplishments achieved when the UEE comes together to tackle important issues. She promised to redirect credits toward improving education and funding scientific research. Her speech even garnered gasps from the audience when she proposed loosening the current restrictions on AI research.

The remaining two independent candidates could be mistaken for Centralists if not for their steadfast support for positions the party deems too extreme. Radana Naidu, a popular Castra politician with record approval on her home world, continues her meteoric rise onto the empire-wide stage. Many of her policies perfectly dovetail with core Centralist principles, but others drew enough criticism from the party to convince her to run as an independent. Her speech focused on these issues by calling for the defunding of Synthworld and the legalization of all drugs. “This issue embodies my belief that more government creates more problems. Centuries of failed drug policies have only created crime and chaos. It’s time to be realistic and admit that narcotics will never disappear. Instead, let’s tax their consumption and use those funds to address the issues that drive people to addiction.” The fact that Naidu cracked the top ten by emphasizing her support for these far-field positions might make other mainstream parties reconsider theirs.

The final and arguably most radical candidate in the top ten was Antwan Lillard, who took the notion of political autonomy and skepticism toward a central government to the extreme by basing his entire primary campaign around the promise of dissolving the central government to allow each system to govern itself. Lillard, who was born and raised in Charon, used his home system as an example of how the UEE’s “overbearing central authority can corrupt and destroy prosperity and peace.” His campaign cry to “let systems determine their own destiny” was met with much less enthusiasm at the signing ceremony than his raucous rallies. Those who wrote off his campaign as nothing but political theater must now contend with the reality that a candidate calling for the end of the Imperatorship and the UEE at large just became a top ten finalist.

This diverse range of candidates will now hit the campaign trail and have but a few weeks to convince Citizens to support their vision of the UEE. The secondary vote for Imperator will commence on April 10th and conclude April 24th. The Imperial Election Bureau will announce the final five candidates on May 1st, and kick off the last stage of the election cycle with the final vote for Imperator occurring between October 10th and 24th.