Announcer: Welcome back to Something Every Tuesday with Esen Landari! Brought to you by Nav-E7 Gadgets, “Improve your ship bow to stern.” Back to you, Esen!

Our final guest tonight is a commercial and critical darling who has written and directed some of the biggest vids of the past few years. Her latest is Parasite V: Dark Birth, an absolutely terrifying return to her horror roots. Let’s check out a clip. 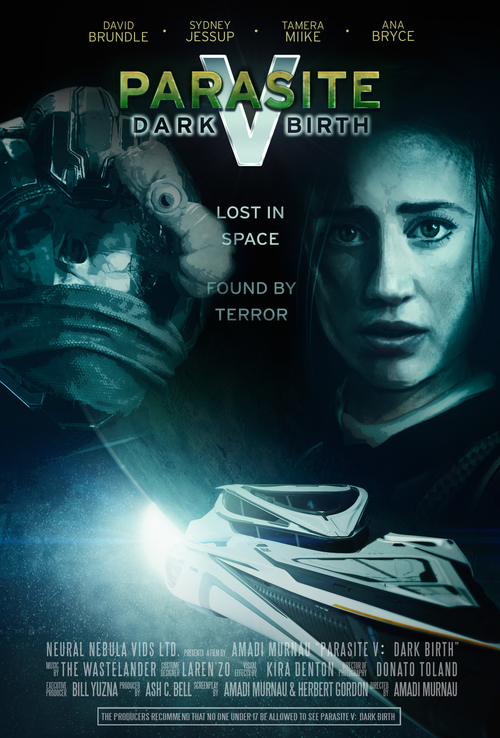 A small group of well-dressed PARTIERS huddle around the 890’s comm station. They look nervous.

LAMBERT: Comms are down…

O’BANNON: You can’t be ser—

The bridge plunges into darkness. There are gasps and a muffled scream. After a beat, the emergency lights kick on.

LAMBERT: When you said the Captain didn’t look right, what exactly did you mean?

O’BANNON: Did anyone see him eat some of that Osoian? Maybe he has food poisoning?

KOTTO: No, he was staring right at me, but his eyes were glazed over, vacant. Almost like…

O’BANNON: He better not have taken some of that e’tam. I explicitly told him to stay off that shit while on duty.

KOTTO: It wasn’t just that.

O’BANNON: Then what the hell was it?

KOTTO: At first, I thought it was something weird with the lighting.

LAMBERT: What did you see?

KOTTO: His skin. It looked like there was something moving underneath it, probing around, trying to find a way out—

A loud BANGING on the cockpit startles everyone inside.

Thanks for coming on Something Every Tuesday!

Amadi Murnau: Happy to be here, Esen. How are you?

Amadi Murnau: Have to admit, it’s kinda strange being here as a guest.

That’s right! Last time you were here you were actually directing me for a cameo in a little vid called Astral Plane.

Yes, I know, I was great, all twenty seconds that I appeared in it. Rest of the vid was pretty good too.

Amadi Murnau: Couldn’t have done it without you, and the hundreds of others involved in the production. But mostly you.

You’re fast becoming my favorite guest. Can you come back again next week?

Amadi Murnau: Wish I could but I’ll be in Castra, I believe, screening Parasite V on the very 890 Jump where we filmed it.

Thanks for the invite. And after all I’ve done for you…

Amadi Murnau: Might be able to pull a few strings and score you a ticket.

Oh no, you’re not getting me anywhere near that 890. Not after knowing what happens to everyone onboard.

Amadi Murnau: Well, I’m excited. It’s going to be a very fun and unique experience that we’ll be touring across the Empire. I’ll be there to introduce the vid. After the screening, they’ll be a tour of the ship highlighting the locations we used, and maybe a few surprises along the way.

Amadi Murnau: It’ll be both, I promise.

I don’t doubt it. Look, I have to tell you, I watched this vid a few days ago and haven’t slept since. It absolutely terrified me.

Amadi Murnau: Glad to hear you liked it.

Oh, I wouldn’t say “I liked it,” more like “I was psychologically scarred by it.”

Every chance I get I’ve been checking mirrors to make sure my skin isn’t bubbling or my eye isn’t being pushed out of its socket. Actually, how am I looking now?

So there isn’t a parasite currently eating my brain and slowly taking control of my motor functions? ‘Cause if you’re wrong, you’re the closest person to me and that parasite makes people do some truly horrific things.

Amadi Murnau: I appreciate the warning, but I think we’ll be ok.

As the writer and director of both this installment and the original Parasite, how do you come up with those grisly visuals?

Amadi Murnau: I start by thinking of things that make my skin crawl.

Amadi Murnau: Sometimes. Usually it’s more something that scares me fundamentally, like a fear of decay or being abandoned. Basically, if an idea makes me feel uncomfortable, I’m on the right path. Then it’s all about thinking through the moment until it manifests in a visual way that’s shocking or surprising. I usually write a pretty detailed description, so the special effects team knows what I want, and then let them do their thing. Often they’ll come back with their own ideas on how to push the effect even further, like in the hot tub scene.

By the way, thank you for ruining both hot tubs and towels for me. I will be air drying only from here forward.

Amadi Murnau: Anytime I turn an everyday object into something terrifying, I know I’ve done my job.

Actually, it’s why I brought you on the show tonight. Please stop making these vids before every object in my house reminds me of something gruesome.

I swear, if you ruin toothbrushes for me…

Amadi Murnau: You’re just giving me good ideas for the next one.

Are you making another one? Did I just inadvertently break some big news?

Amadi Murnau: I’m not sure what I’m doing next. I’ve got a few offers kicking around but haven’t settled on one yet. There’s a lot to consider when picking my next project.

Amadi Murnau: That’s always important for the crew’s morale, but for me it’s more about what will keep me engaged creatively. I can’t keep doing the same thing over and over again. I need something new and challenging to motivate me to get out of bed every morning.

So you decided to make a sequel to your first vid. Makes total sense.

Amadi Murnau: Compared to the massive budget and scope of Astral Plane, it was a complete change of pace. It was a challenge to do something so small and contained again. Plus, I had to find a way to inject energy into the fifth installment of the series and mess with people’s expectations.

Well you certainly did just that. I could talk to you all night, and I have so many more questions for you, but we’re actually out of time.

Amadi Murnau: Thanks for having me.

I’d love to have you back anytime as a guest… or a director. Call my agent, I’m available. And of course, congratulations on another incredible vid. When will it be available on spectrum?

Everyone should see it… if you never want to look at a towel in the same way again.

A big thanks to Amadi Murnau for joining us tonight. I’m Esen Landari, and I’ll see you next week because we have Something Every Tuesday. Goodnight!