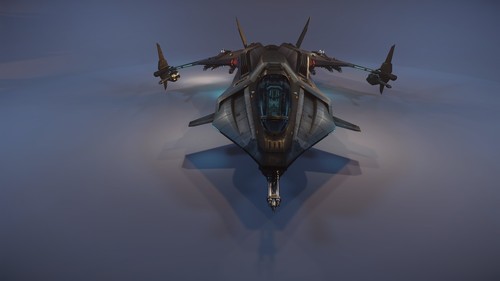 The 36th Fighter Squadron is the United Empire of Earth’s premiere active-duty Gladius unit. First bloodied against the Tevarin, the 36th has seen action in every significant Human conflict in the past three hundred years.

The 36th has its origin in one of the most embarrassing military disasters in Earth history. In 2571, the battle carrier UEES Olympus pursued a band of pirates and rebels home to their hiding place in the undeveloped Nul system. The carrier’s complement vastly outmatched their foe, but the admiral in charge wanted in on the kill personally. He ordered the Olympus into a pass that was too close to the system’s fifth planet, Ashana. The Olympus was caught in the planet’s gravity, impacted on the world’s surface and lost with only a few survivors.

Those survivors included the carrier’s Combat Air Patrol: four Stiletto interceptors, the immediate predecessor to the Gladius, belonging to the carrier’s defensive complement, plus two others who managed a scrambled launch as the ship went down. Taking quick advantage of their unbelievable shift in fortune, the rebel forces rallied to eliminate the remaining ships and lifeboats. The battle that followed was spectacular: the six light fighters were able to hold off their attackers for almost an hour, scoring an astounding 37 confirmed space-to-space kills, including a pocket destroyer, with only their surviving energy weapons.

All six UEEN fighters were ultimately eliminated, as were all who escaped the initial crash, but the black box recorder belonging to Lt. JG Jasmine Tuttle was ultimately recovered by an enterprising pirate and sold to her family on Earth. Seeing an opportunity to cover the embarrassing and costly loss of the Olympus, Naval High Command’s propaganda machine broadcast the recording and made martyrs of the fighter pilots. The result was a series of patriotic advertisements about doing your duty, a melodramatic government-sponsored holovid (Star Heroes) featuring an array of D-list actors as stereotypical fighter pilots and the establishment of the 36th Fighter Squadron in honor of the pilots who fought the last stand at Nul.

The 36th Fighter Squadron formally came online on January 1st, 2579, equipped with the first production run of Gladius fighters. Fast and maneuverable but carrying a light weapons load, the Gladius was the UEEN’s first choice for interception duties. Prior to the unit’s establishment, patrol units were generally considered second-class citizens. Taking a back seat to better-equipped ‘jack of all trades’ units, these squadrons were generally assigned draftees and OCS pilots rather than academy graduates and volunteers. The first charge to the 36th was changing this standard, by grouping the best-of-the-best interceptor veterans to train the patrol elements of other squadrons.

That charge changed drastically with the start of the second Tevarin War in 2603. Within hours of the formal declaration of hostilities, the wing had received orders to the front. Quickly transitioning to an active combat role, 36 FS found itself dispersed among four escort carriers charged with providing cover for Messer’s main battle force. Despite early Tevarin successes against Human capital ships, none of the warships assigned Gladius coverage from the 36th suffered a single torpedo strike during the full course of the seven year war.

With combat success under their belts, the squadron never resumed their training role. Since the rise in Vanduul attacks, the 36th has found itself cycling through assignments on the frontier regularly. It was a 36 FS Gladius element commander, Captain Jordan “Toothpick” Hamton, who first developed the three-fighter ‘carry and leap’ technique for countering the more muscular Vanduul Scythe, and it was a 36 FS replacement pilot who first noticed the slight infrared scanner irregularity that allowed UEE pilots to target early Scythes hidden in asteroid fields.

While high-powered Hornets can steam roll through Scythe squadrons today, this was not the case in the early days of the conflict. For roughly the first decade of Vanduul raids, destroying or disabling a Scythe took both extreme maneuvering and a high degree of communication among wingmen. The first was a specialty of the Gladius’ design, and the second something well ingrained in the highly trained men and women of the 36th.
The squadron’s most celebrated (known) action against the Vanduul took place relatively recently, on August 3, 2940. A force of twelve Gladius fighters was ordered to provide close escort for a civilian Hull C transport ferrying survivors from a recent Vanduul strike. During the course of the planned escort run, the group improbably wandered into the largely undefended rear of a Vanduul supply fleet. By managing fire control through the Hull C and operating as a cohesive unit, the lightly armed force of Gladius was able to quickly eliminate nine fully laden Mule transports and their light escort screen. The incident, coming on the heels of several disastrous Vanduul raids, was played up heavily in the media.

Elements of the 36th Fighter Squadron are presently forward deployed aboard the UEES Sebek. Little information is available about their current missions against the Vanduul, although the consistency with which 36th FS pilots appear in weekly casualty lists indicates that battle is joined frequently. The wing has also been essential in anti-piracy operations, with a number of these operations better known. (An oft-reproduced photo shows the nose of a Gladius bearing the patch of the 36th and two dozen Drake Cutlass outlines.)

Despite the military’s highly-publicized “Battle Ready” campaign to revitalize older spaceframes, observers are unanimous in believing that the ship has less than a decade of active service remaining. The final Gladius ‘service pack’ was issued eight months ago, improving weapons systems and control surfaces, and no additional upgrades have been contracted. With the Gladius being increasingly assigned to reserve wings, guard units and home defense squadrons, the era of these acrobatic light fighters serving as the tip of the sword is coming to an end.

High-level scuttlebutt suggests that the 36th may be one of the first elite units to transition to the F8A Lightning heavy fighter. It’s a prospect the squadron’s pilots aren’t exactly happy about: after generations of proving that a great deal can be accomplished with the simplicity of a light fighter, few are eager to adopt the most complex piece of military equipment in Human history