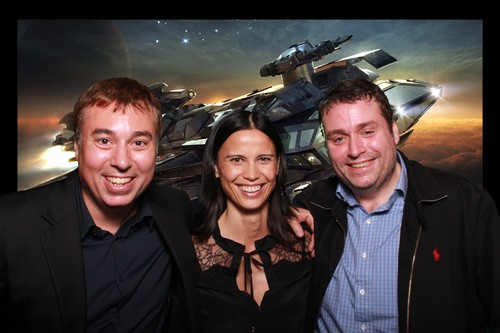 Erin, Sandi and I having fun with the CitizenCon photobooth.

THANK YOU. Over the weekend, we hit both the $57 and the $58 million crowd funding marks, an incredible achievement in itself and one that means we can continue to support and expand Star Citizen. I’m grateful for a lot more than just your backing Star Citizen. Getting to spend Friday at CitizenCon with backers was an amazing experience, and one that confirms that what we are doing here is special in more way than one. It’s hard work to set up these events… but more than worth it for the chance to talk face to face with people that are just as excited about the game and universe as we are on the Star Citizen team. I hope you enjoyed hearing from the various studios and getting your first look at the detail we intend to infuse the persistent universe with. As I said in the presentation: we’re just getting started!

Eagle-eyed backers have noticed a shot of the Gladius in the Hangar during our presentation on Friday. That shot is actually part of a short video put together by Foundry 42 to keep the rest of the team updated on the status of their ships, which include the Avenger, Gladius, Gladiator and Retaliator. In honor of hitting two stretch goals in one weekends, I’d like to share that video with the world. The military ships aren’t quite done yet (there’s still animations, damage stats, sound effects, internal details and the like) but I think they’re looking great. See what you think!

We’ve also just put online a stereoscopic 3D version of the Cutlass commercial. It’s our first 3D commercial, and I think it’s pretty cool. You can check it out for yourself here.

At $57 we hit the first of the Wave Four ship unlocks, the recently-elected Endeavor-class Research Platform! Here’s the initial design description:

Since we reached two stretch goals so quickly, we did not have time for an additional ship poll. Instead of picking the two highest from the previous poll, I’m going to go ahead and announce the last winner as the $59 million stretch goal ship and start the poll for $60 million with the remaining options. I’m a fan of seeing the community debate these things, and as the pool of options decreases it’s great to see backers “campaigning” for their favorite option. Have at it!

We aren’t forgetting $58 million, though. In honor of the goal, we’re giving 10,000 UEC to every backer that you can use for upgrades and flair in the Voyager Direct Store. I’d advise you hold on to the creds: we’re going to have some cool configurable weapons and other upgrades for Arena Commander in the near future! 10,000 UEC may not seem like a lot, but at this stage in the game it actually means we’re giving our backers several million dollars to outfit their ships!

Here’s the next ship winner, which you decided would be the repair platform:

The Crucible should be another great beyond-combat ship that will help expand the roles available in Star Citizen’s persistent universe. Now, go vote for the next one… and convince everyone else on the forums that they should, too!

Again, thank you for the support. Thanks to the incredible response you gave us at CitizenCon, the entire team is charged up and ready to show you what else we can do. It’s going to be good!

What role would you like to see for our fourth wave of ships?