Only a few days ago, I wrote the $54 million letter which is truly incredible. I think everyone should take a moment to appreciate the enormity of what you as a community have achieved. Two years ago, the idea that a group of people who love space sims, PC gaming and the promise of a huge new universe to adventure around in could unite to raise $55 million to fund a game was unthinkable. Every one of you, from single Aurora pilots to those building their own fleets, has been part of something unprecedented. Today, we’re in the Guinness Book of World Records, and not as the largest crowdfunded game of all time, but as the largest crowdfunded anything of all time! 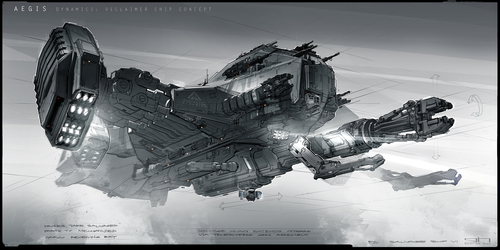 Reclaimer Concept Art showing the claw in use.

I’m very glad to see that the Reclaimer is so popular! This is a ship that you made possible, and I think it speaks to exactly what’s cool about Star Citizen: we’re going beyond the traditional dogfighting game and building a living universe. The fact that so many players want to take part in salvage ops makes me more hopeful than ever! How many have we sold? Well, in the Reclaimer’s description, we mention that it can store roughly a single Constellation worth of scrap. In the current stats (always subject to change!) a Bengal carrier weighs in at about 1,400 times a Constellation… meaning that it would take 1,400 Reclaimers to haul it away as wreckage. Well, the UEE had better watch out: we’ve released enough Reclaimers so far to dismantle THREE Bengals! I’ve included a new piece of Reclaimer concept art which has just come in; here you can see the ship’s claw salvage mechanism in action!

I sometimes get asked why continue to raise money. Haven’t you already raised enough to make the game? The answer is that Star Citizen isn’t a normal game. It’s not being developed like a normal game and it’s not being funded like a normal game. I’ve had to toss aside a lot of my knowledge from the old way of developing and embrace a completely new world. There is no publisher. There is no venture capitalist wanting a massive return in three years. There is no need to cram the game onto a disc and hope we got it all right. Star Citizen is not the type of game that will be played for a few weeks, then put on a shelf to gather dust. Instead of building a game in secrecy we can be fully open with you as a community who have made this game possible. We can involve the future player base in the creative feedback loop as we develop and iterate core systems. As a group we are all involved and united in our quest to make the best game possible.

I have a lot of industry friends pat me on the back and say, “Wow, it must be so great to be operating in profit even before you ship!” Their look usually turns to incredulity when I explain that my intention is for all the money we bring in before launch to be spent on development. It is the community, from the existing backers who continue to support the game, to new members who join every day who are setting the level of ambition and budget for Star Citizen. Every effort is about enriching the game’s vision. Funding to date has allowed us to go so far beyond what I thought was possible in 2012. You’re still getting that game, no question, but it will be all the richer and so much more immersive because of the additional funding.

Long ago I stopped looking at this game the way I did when I worked for a publisher who gave me a fixed budget to make a retail game. I now look at our monthly fundraising and use that to set the amount of resources being used to develop this game. We keep a healthy cash reserve so that if funding stopped tomorrow we would still be able to deliver Star Citizen (not quite to the current level of ambition, but well above what was planned in Oct 2012). If you combine our in-house staff and outsourced developers, we now number more than 280 people. Your support has created a significant number of jobs in the gaming industry. (And no matter what you might have heard, only a small number of our team is tasked with designing new ships!)

If we had raised the original amount and no more, we wouldn’t be able to deliver involved capital ship systems or the level of FPS gameplay that we are now planning for planets in the Persistent Universe. Nor would have the time or budget to continually upgrade the game with new features like Physically Based Rendering (PBR), or continually strive to make the art assets better. Just compare the Hornet from October 2012 to the current PBR Hornet in Arena Commander. Our ability to iterate in Arena Commander, to try different flight or targeting schemes, or add new game modes that are test beds for future Persistent Universe gameplay is all due to our increased funding, as is the ability to deliver FPS, Planetside and Squadron 42 as modules or episodic content for the community all before the game is “done.” And in the process, you’re giving us the time to get it right, and you’re giving us more opportunities to share our work with you.

I know some people are afraid of “feature creep” and the game never being finished as we keep adding functionality and content to the mix with increased funding. I would say that this would be fair criticism if we were delivering this game at retail and on disc. However, we are online and already pushing out builds, well before Star Citizen reaches what anyone would consider a “finished” stage. Just because we haven’t implemented a planned feature or built a certain asset yet doesn’t prevent us from sharing the game with everyone right now. It’s this evolved process which gives us the Hangar and Arena Commander and so many modules yet to come. We’re sharing the game as it’s being built and it’s an amazing opportunity for everyone who has backed, to have input on the direction the game is going. You just don’t get this in the traditional game business.

Ship sales and new members of our community are the two main fund raising sources. I want to stress that no one has to or should contribute more than the basic amount for a starting package. Everything is earnable in the game with enough time (and skill). However, if you like the direction we are taking and want to contribute more to the development of Star Citizen, then purchasing different ships with diverse roles are a great way to give back for this support. The new ships add interesting new gameplay and populating the future Persistent Universe with a range of different ships, flown by players pursuing all kinds of professions, will only add to the richness of the game once it’s fully live.

That’s what Star Citizen is about: the creative freedom to build something unlike anything that has been done before and the ability to do it with the support of a community that is as passionate about this game as I am. We want to make the Best Damn Space Sim Ever, and with your continued support I know we will.

Now, on to the stretch goals! This time around, you unlocked a user-voted ship upgrade!

We’ll be placing two of these guns on every account that backed before $54 million, and they’ll be available in a future Arena Commander patch! (These guns will be among the first to come off our new component pipeline.)

For our next series of stretch goals, we’re going to ask you to pick ‘wave four’ of Star Citizen’s ships! Now that the previous set, also selected by backers, are exiting the concept process, our artists can start on another group. We’ve selected ten ship concepts we think are interesting and which would improve the Star Citizen universe. Some are combat-oriented, others speak to the larger Star Citizen universe… and the next one we build is in your hands! With each upcoming letter, we’ll select one winner and eliminate the least popular, until five have been chosen. Please vote for your favorite in the poll below.

I’m excited to see what you choose; I know my favorite already. Your input helps create Star Citizen just like your pledges. We couldn’t do this without you; thank you for making the Best Damn Space Sim Ever happen.

What role would you like to see for our fourth wave of ships?