Consolidated Outland and its fan-favorite Mustang spacecraft are the brainchildren of so-called “rebel trillionaire” Silas Koerner. Born a mere billionaire, Silas was the sole heir to a family fortune that was generated in the early days of the Bremen System’s settlement. His several-times great grandfather was responsible for settling much of the planet’s temperate regions and cashed in deeply when the newly-formed United Empire of Earth essentially chose the world to feed the Tevarin war effort. Koerner has not been content to sit on his bank balance, doubling his fortune time and time again with his seemingly outrageous but always on-the-money investments. At age sixteen, he invested half his fortune in a small jump communications company that happened to then find UEE sponsorship and take off. Following that start, millions invested in fish farming immediately reaped a massive return when Earth-based seafood, which could be grown easily on Bremen, became all the rage on developing colonies. The pattern continued as he invested in electronics, mining, remote charting and even the increasingly faltering terraforming industry, always with great success.

His current interests are truly diverse: he can be aptly titled everything from a shipping magnate (full owner of Tri- Cross Lines, among others) to a news mogul (controlling interest in no fewer than nine text-cast and holo outlets). But even more outrageous than his investments is his seeming lack of a personal life: since his rise to fame, tabloids have stalked him at every turn for the slightest sign of anything prurient … and have consistently come up empty. In truth, Koerner’s apparent sole love is astronautics. Since crossing the multi-billion mark at age 22, he has become a passionate space pilot and a collector of rare ship designs. His collection, which currently numbers some three-hundred- odd ships, is housed in a massive underground museum on Bremen and includes everything from a vintage Roberts Space Industries Zeus to the sole surviving Drake Lobster prototype (which remains unflown and still packed in its shipping foam).

Consolidated Outland is the end result of his lifelong interest, his attempt to build what he deems to be the ‘perfect’ spacecraft. Although the name (and associated corporate background) is strongly intended to imply an alliance of distant worlds toward a noble technological goal, in truth Koerner owns one hundred percent of Consolidated
Outland. No Mustang variant takes shape without his input and he has been known to appear without ceremony on the factory floor, insisting that changes be made on the fly to in-production spacecraft.

Consolidated Outland is based on Koerner’s homeworld of Bremen, and no corporate facilities are located offworld. Koerner’s private property is also Bremen-specific, and he apparently leaves the planet only for pleasure (test flying a new spacecraft model on the fringes of Sharon’s Nebula is a favorite pastime). He communicates with buyers and offworld interests exclusively via telepresence robot.

While Koerner refuses to comment on his personal life, he has been outspoken in his criticism of other manufacturers’ spacecraft, seemingly finding vocal fault with every design from the Aurora (“flying trash can”) to the Gladiator (“a half-assed toy for full grown children to play fighter hero“) to the Freelancer (unprintable). Koerner is somewhat naturally an avid star racing fan. He owns a top tier racing team outright (The Blue Devils), and maintains luxury box seats at all Murray Cup events.

Consolidated Outland began life innocently enough, producing vanity spacecraft conversion kits. The conversion kit business was Koerner’s attempt to stealthily enter the industry, to prove that he could marshal the resources needed to produce high quality aerospace parts before springing the Mustang on the galaxy.

The first range of conversion kits were high-quality “style” kits for common spacecraft: chrome trim for the Aurora CL, decorative spoiler attachments for the Freelancer and the like. No new craft based on these designs are available today, and existing ships fetch extraordinary sums on the secondary market. The reaction from specialists at the time was (and continues to be) that they were high quality attachment parts that served no practical purpose; seemingly Koerner’s attempt to “fix” what he saw as visually broken spacecraft designs.

Consolidated finally hit it big with the more crowd-pleasing aftermarket F7A Hornet kit, which converts the appearance (but not the hardpoints) of civilian Anvil Hornet fighters to match their military counterparts. With the launch of the Mustang, manufacturing of F7A conversion kits has ceased (although the kits are still readily available). Whether this has to do with a desire to focus on Mustang development or to rumors that the conversion kits were in no way licensed through proper channels at Anvil is anyone’s guess. 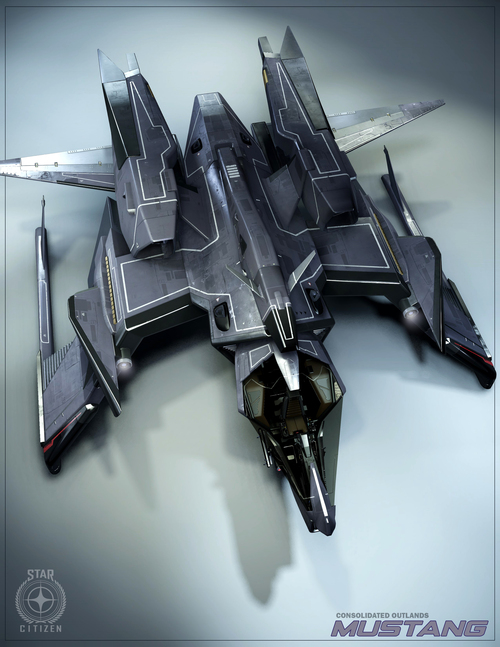 The Mustang is the ship Koerner has always wanted to build, a stylish, fast and lowpriced alternative to the RSI Aurora and Origin 300 series. The Mustang looks like
nothing else in space and utilizes over fifty unique alloys in order to keep weight down
and allow for its mass production on a less developed world. Internally, the vast majority of systems come from the company directly, from the Consolidated Outland Magma Jet engine to the Consolidated Outland Icebox P cooling system. (Some systems, such as weapons and shields, are still provided by outsources; Consolidated Outland maintains that they do not construct weapons, they simply allow weapons to be mounted on their ships for proper defense.)

While only the standard Mustang Alpha is currently available for sale, rumors claim that a series of variants are available in limited numbers to the proper buyers, such as outerworlds militia units, and that these are being developed with a likely eye towards eventual wide release. All that is known for sure is that none of these ships will be the ‘Twin Mustang,’ a makeshift long-range double fuselage variant developed early on by simply welding two incomplete Mustangs together. The Twin was naturally unstable and a resulting crash killed two test pilots. Koerner issued a rare quote to the press, saying that the Twin Mustang was a “terrible, terrible idea, which will not be revisited.”

Speculating on the basis for Koerner’s involvement in any business isn’t done easily, although it does seem that Consolidated Outland is here to stay. With the discovery of additional metal resources on Bremen and the general success of the Mustang range, it seems safe to say that Consolidated is hard at work on their next big thing.