You would need to be living under a rock not to be familiar with Stor*All’s famously garish commercial broadcasts, which feature a cartoon animal of indeterminate origin (popular theories range from Terran badger to deep asteroid fur crab) explaining to a hapless transport captain that Stor*All Big Box series cargo containers can meet his every need. The captain offers example after example of item that surely can’t be transported in deep space, followed by the cartoon’s grating refrain “No worries, it’ll STORE ALL!”

And like their commercials, the products of the Stor*All corporation have become a seamless part of the background noise of everyday life in the modern Empire. Any individual UEE Citizen would be hard-pressed to go a day without somewhere coming into contact with its product, and the prospect of somehow going without goods that were at some point shipped inside a Stor*All container is unthinkable: nearly 50% of all items transported between two atmospheres will make their journey in a Store*All unit, a truly amazing market share given the simplicity of the product’s design.

Stor*All was incorporated in 2745 on Lo as a Corel Limited Liability Corporation. The company was originally known as TransGo and underwent nearly a dozen marketing-oriented name changes (including both “STUFF-IT” and “Shiploads”) before finally finding success when coupled with the utilitarian image that comes with the Stor*All brand. Investors settled on Lo as the headquarters in order to take advantage of the then-burgeoning trade between the UEE and the Banu Protectorate.

The company has been notoriously litigious, both on the offense and the defense. Stor*All has filed hundreds and hundreds of patents with the UEE government, running the gamut from deserved (“nano-molecular impact pad weaving mechanism”) to wholly unreasonable (“cube-shaped cargo area for spaceflight purposes”) and is quick to defend them from any potential competitor. One look-and-feel lawsuit against Alliance-Conway Shipping Goods has dragged through the courts at a glacial pace: after eight years, it shows no sign of pending resolution.

Another ongoing legal issue is the company’s enthusiastic protection of its name. Fearing that the term will become commonly applied to any space transport unit, Stor*All puts hundreds of thousands of credits each year into a parallel advertising campaign aimed at reminding consumers that what they sell are Stor*All brand containers and not “Stor*Alls.” (This has the added benefit of enforcing the idea that a Stor*All unit is of superior make to anything else on the market.)

More often than not, however, Stor*All’s legal department makes the news for their tendency to target unrelated businesses with similar names. In recent years, they have shuttered everything from Sammy’s Sure Haul Diner on MacArthur to Terra’s fashionable ALL STORE clothing importer. (As unsurprised onlookers are quick to point out, ALL STORE just happened to ship goods using exclusively branded Conway containers.)

One of the most common questions asked by those not involved in the intricacies of interstellar trading is: where do Stor*All containers come from? Stor*All containers are the odd product that can appear throughout every hangar, dockyard and factory floor in known space without actually having a clear owner. The perhaps surprising answer is that every Stor*All container is actually a rental unit. Containers are rented for a small fee when goods are approved for off-world shipping; this fee is nearly always taken into account as part of the price of the goods themselves. The economics of this process are practically invisible to the naked eye: the trading system has evolved to the point where container rental is fully institutionalized.

The standard Stor*All container is rated for 500 jumps and the company takes quality control extremely serious in this regard. Vast quantities of expired containers are sold at low prices to less reputable shippers for permanent use. Sometimes called “ghosts,” these can typically be identified by blotches of newer paint covering the Stor*All logo. Stor*All has no liability for containers shipped in a “ghost,” and most insurance companies refuse to compensate users who suffer a loss while making use of the retired containers. 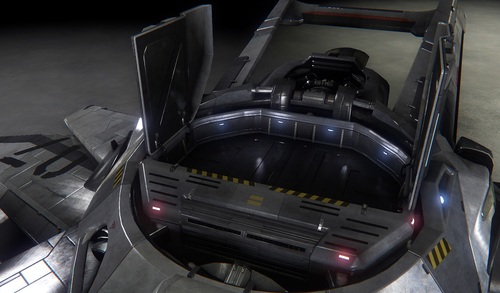 While Stor*All’s corporate presence (and associated advertising) thrives on a sense of the ridiculous, their product does not. The standard Stor*All Big Box cargo container is more than an empty crate for transporting goods: it’s a high-tech container solution with thousands of man-years of engineering behind it, a rock-solid piece of equipment that genuinely is built with the goal of storing everything possible.

Big Box (called Tough-Guy before 2935) is the standard expandable cargo series from Stor*All. Big Box units are tough, with a Titan-grade metal exterior, a ribbed body skeleton and a cushioned super-reinforced ablative rubber interior. The original Big Box Model A is perhaps the most familiar ‘cargo container’ within Human space, used for everything from the standard attach point on the Aurora CL to makeshift enclosures on hostile planets (upon retirement). Variant Big Box units have been designed for individual spacecraft; for example, with the rise in popularity of civilian Hornet models, Stor*All has designed the Big Box Model H using the same protective technology but with a form factor that allows it to slot into a Hornet’s turret system.

One step down from the Big Box, the Mini Cargo Pod is a five-rating shipping container useable by small craft, including and most notably by the standard model Roberts Aurora. Capable of shipping a modest quantity of bulk goods on long distance runs, MCPs are extremely common.As they are frequently mounted externally, MCPs have a layer of radioactive shielding not present on internal models and can be equipped with additional hardware such as scan dampeners. MCPs are frequently transferred in flight, and they can safely be left in orbital pickup yards for long durations.