Two pieces of great news: after a long night of hard work, the promised Hangar patch is available! You can check out the Avenger, the privateer outfit, the Aurora LN, the fish tank… and a few other surprises. The second piece of news is that in just four days, we’ve hit $22 million in crowd funding! Between the hangar patch, the bomber reveals, the Aurora LN, CIG Manchester and the start of The Next Great Starship, this has been a big anniversary week… and the best is yet to come! 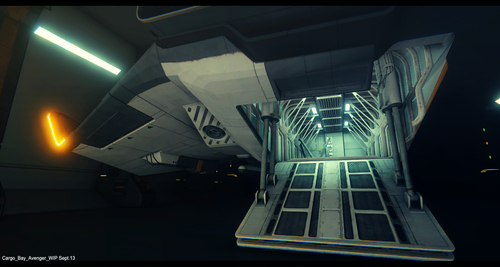 We’re very excited about how this is going to improve the game (and our artists are eager to start playing with this technology!) I’m also pleased to announce our $24 million goal:

In addition to this immersion-enhancing design upgrade, we’re also going to dedicate some of the additional funding to making next year’s CitizenCon a bigger event! Thank you for making this all possible. Keep spreading the word!

One of the major features of the new patch is the introduction of the Aegis Dynamics Avenger in the hangar module, which you can check out and explore right away in-game. As mentioned in our Happy Birthday post, we have made an Avenger package (Advanced Hunter) available in the store so future bounty hunters can start right off with some cool equipment.

Also viewable in the hangar module is the newly revealed 2944 Aurora Legionnaire, which we have made available for the next week!