Letter from the Chairman: $20 Million!

Letter from the Chairman: $20 Million!

Star Citizen fans have set yet another record in crowd funding: $20 million pledged to make sure this game is made by developers instead of publishers. It’s especially fitting to me that we reach this goal today, on the anniversary of the release of the original Wing Commander. Thanks to the support of this incredible community, Star Citizen embodies everything I dreamed of doing with that series, and opens up the potential for so much more. Each of you has helped to make this possible and you are allowing us to create a game the way games should be created. Thank you!

At the $20 million mark, you unlocked the following stretch goal:

What this means is that we’re expanding the FPS mechanic we’ve already created for the ship boarding system to apply to more areas of the game. Join an ongoing battle on a contested world, launch an attack on a pirate base, come to the rescue of distant colonists and fend off Vanduul raiders … the possibilities are endless. 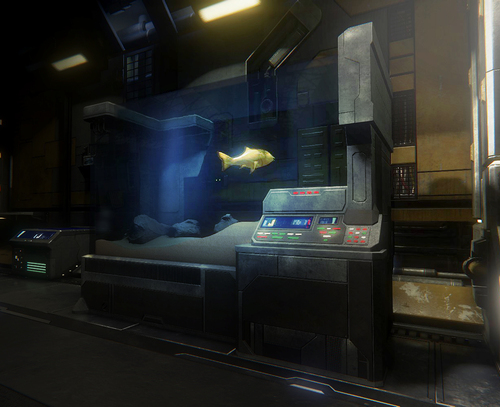 In addition to this stretch goal, we have an extra reward for the community: a fish tank decoration for your hangar! In the grand tradition of Starlancer, here’s a little bit of nature to break up your high-tech hangar. Your fish tanks will be added to your accounts very soon and will be included with the Hangar in an upcoming patch. Included in your fish tank is a rare gold Midas fish, found on the planet Cassel in the Goss System (pictured above). Star Citizen will allow you to add more fish to your tank by exploring distant planets and collecting new species.

In the last stretch goal letter, we asked the community to decide how to handle the funding counter after we reach $21 million. 87% of you voted to keep the counter going. That is one of the most clear cut answers we’ve had from the community. As a result, we will continue to announce stretch goals that reward our early backers and enhance the game in ways we had not originally deemed possible. The first of these goals, for the $22 million mark, is as follows:

There has been some concern about “feature creep” with the additional stretch goals. You should all know that we carefully consider the goals we announce. Typically the stretch goals fall into two categories;

The first are goals that involve features we already have planned or have implemented, but we couldn’t create content because of budgetary constraints. The first person combat on select planets is a great example of this type of goal. We already have FPS combat as part of the game in ship boarding, and we already have most of this already functional thanks to CryEngine, as we essentially have Crysis3 functionality out of the box. But creating all the environments and assets to fill them is a huge task, so we were planning on not doing any planetside combat initially, simply because of its cost, with the idea that we would slowly roll it out once the game is live. But with the additional funds we can now afford to create some of this content earlier rather than later.

The facial capture system is an example of the second type, where we identify technology and equipment that will make the game better and allow us to be more nimble and economically efficient in continually creating content for the ongoing universe that we are aiming to support. The motion capture system and sound studio were goals that feel into this category.

But both types of goals are carefully considered — we don’t commit to adding features that would hold up the game’s ability to go “live” in a fully functional state. Also remember that this is not like a typical retail boxed product — there is no rule that all features and content have to come online at the same time! As you can see from the Hangar Module we plan to make functionality and content come on line as it’s ready, so you should look at the stretch goals as a window into the future of functionality and content additions we plan for the live game.

We also have another poll for the community. As you know, we are continuing to develop the Hangar Module. You have been incredibly helpful in identifying bugs for the team to fix … but hangar development isn’t going to stop there. The Hangar Module is the first brick that will lead to Star Citizen and we’re going to start expanding outward in a variety of different ways. In the short term, we’re filling out the hangar! That means more equipment, more interactivity and more areas designed to turn it from just a place to keep your spaceship into your personalized home.

We’re asking for what you would like to see next in three areas of the hangar: extra rooms (add more space to the hangar), decorations (add more objects to the existing space) and augmentations (let you customize the existing space). All of these are on the horizon in some form, but we want to base our development schedule around what the community most wants to see.

As always, thank you for your support. In the past year, this community has gone above and beyond in extraordinary ways over and over again. Your dedication, your creativity and your passion for Star Citizen continues to amaze us. Please keep spreading the word: you are making Star Citizen a reality.