This portfolio originally appeared in Jump Point 1.7. It was updated in May 2019 to more accurately reflect the company’s ships and history.

If it is possible for a company to merge class and sophistication with the sheer risk of spaceflight and the cold-blooded nature of interstellar dogfighting, Origin Jumpworks comes the closest. The company’s extensive array of high-end spacecraft is known for their sleek and sophisticated lines. Similarly, they have cultivated an exclusive customer base from the rich and the powerful. As Origin’s perfectly-manicured sales representatives eagerly point out, selecting an Origin design doesn’t just mean buying a ship … it means choosing a lifestyle.

Origin was incorporated during the mid-28th century, and produced high-quality thrusters used by the UEE military and mounted on the ostentatious Roberts Space Industries star yachts. With the need for personal spacecraft growing exponentially, Origin stopped making components and made a move to compete with the companies they initially supplied. Within ten years of this transition, the company was producing a top-five selling midscale transport, and within fifty years their small and exclusive customer base had propelled Origin’s gross profits to be neck and neck with RSI’s spacecraft division.

Founded on the banks of the Rhine in Cologne, Origin initially had strong ties to Earth, going so far as to manufacture every component for their elite 600 line in Sol. These strong ties were severed in 2913 when President Jennifer Friskers made an unexpected executive order that declared Terra as the new cultural capital of the UEE and announced intentions to move the corporate headquarters and primary design team from Earth to New Austin. Since then, almost all of Origin’s manufacturing operations have left the Sol system, with only an engine testing facility remaining on Earth’s moon. Government scrutiny of the company since the move has also flourished with tax issues quadrupling. In 2944, a hack of Origin’s systems leaked a ship prototype called “Goldfinch.” An ensuing scandal implicated the Senate’s Office of Executive Services (OES) in orchestrating the theft, but no formal charges were ever filed.

New Austin has since become an “Origin town,” with the company holding fast as the key employer. The system has become a mecca for Origin enthusiasts, with wealthy buyers traveling across the galaxy to purchase their ships straight from the factory floor. A stunning company showcase in the center of the city highlights M50s, 300s, and 890 Jumps in a series of life-sized action dioramas that carry a significant cost to set up and display. Additionally, Origin has sponsored naming rights for local stadiums, education centers, and streets. Tourists not looking to land a luxury ship instead leave New Austin with a cocktail glass set laser-etched with the Origin logo, branded clothing, or highly detailed Takuetsu ship models.

Through the years, Origin has remained synonymous with luxury, while also delivering a diverse lineup that includes open canopy cruisers, single seat speedsters, and luxury yachts. CEO Jennifer Friskers consistently pushes the company to reinvent the wheel. She often requests that engineers and designers revisit old ideas to see if fresh eyes or modern advances might now make it Origin worthy. The result is a vast staple of ships that can address a wide variety of functions while still maintaining Origin’s sleek and sophisticated style.

Ship creation stories often mix myth and reality. Engineer Alberto Vara claimed his initial sketch for the X1 only took ten minutes. Suffering from a creative block while working on the M50, this speed sketch was merely intended to get his creative juices flowing. Once complete, it was filed away and forgotten for decades.

When Origin decided to design an open canopy racer, an archival search uncovered the sketch. By then Vara had become one of the most celebrated astroengineers in the UEE. He twice won the Aron Award and had climbed Origin’s corporate ladder to become Chief Engineer before leaving in 2932 to found Infinity Customs, a full service ship customization studio and garage. Origin decided that the only way to make the X1 was with Vara’s blessing and help.

Famously flight tested and then abandoned, Origin scrapped the original 100 Series design due to concerns that it didn’t fully embody luxury. The 200 and 300 Series took precedent and work on the 100 Series stagnated for decades. That is until the early 2940s when the company developed the state-of-the-art AIR (Adaptive Intake Refinery) fuel system. AIR significantly reduced thruster emissions and could extract and convert a wide variety of gasses into usable plasma to reduce the need to refuel.

When early simulations showed that lighter ships would benefit the most from AIR, CEO Jennifer Friskers dusted off the 100 Series schematics. For years, she had wanted to expand the Origin lineup to include a new entry-level ship to hook consumers into the brand, but knew it would need a distinguishing feature. AIR was it. Designers integrated the revolutionary new system into the old chassis and leveraged decades spent defining the Origin style to ensure the 100 Series looked, felt, and flew like a luxury craft.

The current workhorse of the company’s lineup (if any Origin craft can be so described) is the Origin 300 Series, a “luxury class” dogfighter. It is to the credit of the company that such a description is not a contradiction in terms: the smooth, aerodynamic lines of the 300i base design perfectly evokes both a flowing work of technical art and an ideal killing machine. Every element of the 300 Series feels designed, from the recessed missile mounts to the flowing metal gun attachments … and, of course, it was: thousands of hours went into the development of every individual element of this spacecraft. 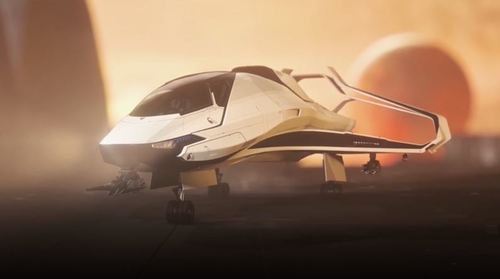 Origin currently manufactures four standard 300 Series models, and offers a variety of customization options for pilots looking to personalize their ship or tailor it toward their preferences. Though the sales copy advertises that the advanced models fit any lifestyle, observers can easily ascribe specific tasks to them: the 315p, featuring long-range options and improved scanners, is the exploration model and the 325a, with heavier weapons and armor, is more combat focused. The final standard 300 Series model, not produced in large quantity but arguably the best known beyond the base, is the 350r. This dedicated speedster is used by professional racing teams around the galaxy. 350rs have a storied history, including an impressive number of Carrington Derby wins. From multi-system endurance races to intersystem speed runs, the twin-engined 350r is a common sight along the racing lanes.

The Origin M50 is often referred to as a power plant with a cockpit attached. Introduced in 2920, the M50 represented another leap forward in engine technology that gave the 350r a run for its money. Despite well (if not overly) publicized teething difficulties in the prototype and Y-series test ships, the current M50 lineup is a solid spacecraft design that promises exceptional speed, and has proven it time and time again with multiple Murray Cup wins.

In the late 2930’s, the UEE Advocacy purchased a bulk of these racers to convert into interdiction ships. These custom models became notorious among outlaw packs, several of whom had open bounties available for anyone who would risk the wrath of the Advocacy by destroying one.

Intended to infuse the Origin line with a bit of versatility, the 600 line began as a function first mid-sized transport that the company sold as perfect for both work and pleasure. Yet sales never came close to matching other Origin ships, as both customers and critics couldn’t quite figure out the ship’s intended customer. Despite the commercial indifference, the company still considered it a success. They strategically built the ship entirely in Sol, which made the brand beloved by local, powerful politicians and many of Earth’s ultra-rich who owned companies that supplied their facilities. The “made in Sol” manufacturing strategy changed once the company moved their headquarters to Terra, and eventually so did the ship.

As Origin refined their version of luxury, the company went back to the drawing board to bring the 600 in line with the company’s iconic aesthetic. Engineers used the same chassis but refined the interior’s shape language, used higher quality materials, and added massive diamond laminate panels to create an observation deck. Put into full scale production for the 2947 model year, Origin symbolized this upgrade by adding an “i” to the ship’s name. Those looking to buy the ship on the secondary market should be wary of unscrupulous sellers looking to offload older, outdated models.

The Origin flagship that has come to define luxurious space travel. The ship cuts an impressive and iconic silhouette and comes equipped with a wealth of amenities. Unrivaled in style and sophistication, many CEOs, politicians, and spectrum stars now consider the 890 Jump their home away from home. 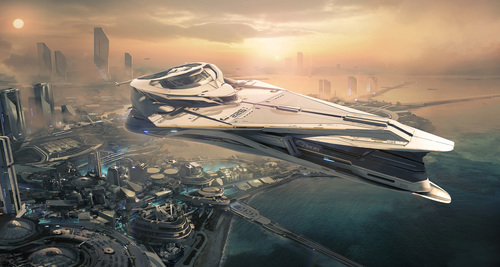 Despite the ship’s now vaunted status, the 890 Jump was a major gamble for Origin when they first put it into production in 2858. Astronomical manufacturing costs caught the eyes of investors and analysts, who feared it would be a massive money pit without enough buyers to turn a profit. Origin stood by their market research that showed a desire for such a ship, yet even they were surprised by its massive success. The company even reduced their marketing budget after owners flooded the spectrum with images and vids of the elegant and opulent ship.

Later versions of the 890 Jump, starting in 2903, came standard with the 85x Limited, a luxury two-seater snub ship perfect for quick excursions. Origin infused the ship with the same thrusters as the 300 Series, making it a unique hybrid of racer and touring ship. Fast, agile and elegant, it’s the ideal companion to the 890 Jump.