Expansion and exploration as we know it today would simply not be possible without the discovery of ‘jump-points’ or gaps in time-space.  For each point, there is a corresponding point or exit in another star system.  While traveling through a jump point may take five minutes or a half an hour, the distance you cover can be thousands of light years.

In 2271, Nick Croshaw became the first pilot to successfully traverse a jump-point.  His discovery led to the establishment of the Croshaw System and established a new era of human expansion in the universe by allowing us to travel vast distances of the universe without the need for FTL Engines.

Q:  How will I know when I find a jump-point?

A:   Visually, a jump-point can look like shimmering air on a hot day.  In the dark of space, that can be almost impossible to spot so they are usually detected through very precise scans.  Not all jump-points are the same, so they can have a variety of energy signatures.  For example, the Croshaw System was discovered when Croshaw noticed a flow of neutrons disappear into nothing, like a draft through a crack in a door.

Q:  I’ve discovered a jump-point.  What should I do now?

A:  Keep notes.  Make sure you mark down exactly how you discovered the jump-point.  What scans did you use?  What was the angle and position of your ship when it appeared.  All of this data becomes instrumental in replicating the conditions to consistently open the jump-point for general travel.

Q:  I’ve made detailed notes of the jump-point’s location, do I get paid now?

A:  No, the discovery of a new jump-point alone is not enough to warrant payment.  You must successfully traverse the jump-point and return with the route you took.

Q:  Sounds easy enough, can I just fly through?

A:  Technology has advanced quite a bit since the Croshaw days.  Aside from the combination of a speed and angle of approach, Croshaw discovered that the key to accessing a jump-point was the emissions of an exposed fusion core.   Modern-day jump-drives, such as the RSI Frontier system or MISC Traveller, replicate that emission pattern to expand or “open” the jump-point with enough consistency to facilitate travel.

Flying an uncharted jump-point is like piloting without brakes.  Before entering, Make sure you have a UEE-approved NavDrive to record the flight path through the jump-point (currently accepted NavData formats include PRE, R2F, TJ, VCE).

The distance between the entrance and the exit, known as interspace, has been described as a smear of sight and sound.  Movement is both fast and slow.  Though scientists are still analyzing exactly what happens between jump-points, it is a commonly accepted belief that, once inside, the foreign matter (you) will be pulled toward the exit.  There are bodies of unidentified mass in interspace that can damage or destroy your vessel so you will need quick reflexes and rapid scanners.

DISCLAIMER:  Navigating an uncharted jump-point is extremely dangerous and may result in injury/death.  The UEE does not endorse such actions and is not responsible for damage incurred to pilot or property.  Traverse at your own risk.

Q:  I did it!  I’ve successfully navigated the jump-point, recorded the flight path, and returned.  What now?

A:  Congratulations.  Please report to your local UEE civic station to submit your jump-point for review by the Department of Transportation & Navigation.  Multiple submissions of the jump-point will be recognized on a first-come/first-serve basis. 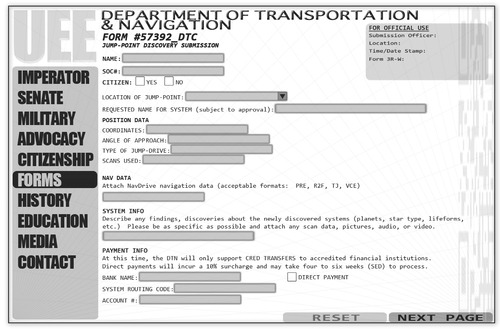 Here is a sample form